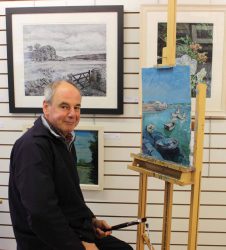 He has worked with a wide range of different media but in recent years has mainly worked in Acrylics. Whichever medium he has used however, he has always maintained his belief in the importance of drawing, both in his own work and within his teaching of the subject.

His fascination with Landscapes & Seascapes has remained since his early years as an art student, and drawing and painting continue to provide him with the visual means of expressing his personal and emotional response to an ever-changing subject.

Nigel has travelled widely throughout the British Isles, but in the last ten years in particular to South West Ireland and the Beara Peninsula. His interest in this dramatic coastline has established Nigel as noted artist in the area and his work is showcased at The Beara Gallery as a permanent exhibition.